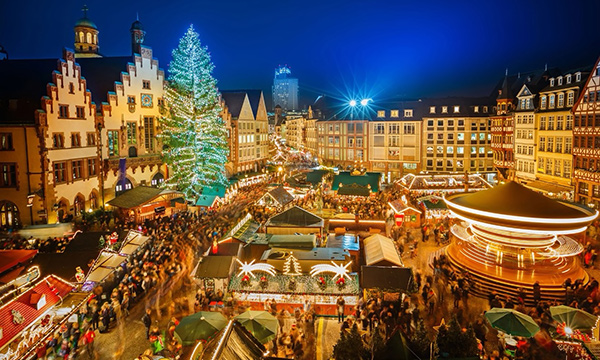 Whilst many German cities and towns have a scenic backdrop of historic houses and beautiful squares for their Weihnachtsmärkte, dating back to 1393, Frankfurtʼs Christmas market is one of the oldest in the country, and the scenery and atmosphere is uniquely enchanting. Officially opened by the city’s mayor late last month, the elaborate and lavish decorations, the scenic surroundings of the Römerberg and St. Paulʼs Square and the huge Christmas tree in front of the Römer all combine to make Frankfurtʼs Weihnachtsmärkt one of Germanyʼs most beautiful, stretching from the Zeil shopping mall to the Römerberg and down to the River Main. With more than 200 beautifully decorated stalls vying for attention, and the scent of roast chestnuts, mulled wine and grilled sausages permeating the air, its impossible to resist sipping on hot apple wine with cinnamon and cloves, or treating yourself to some Bethmännchen almond candies.